American who is walking across the country for Ukraine 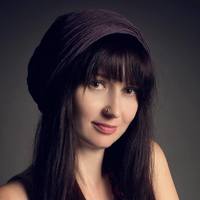 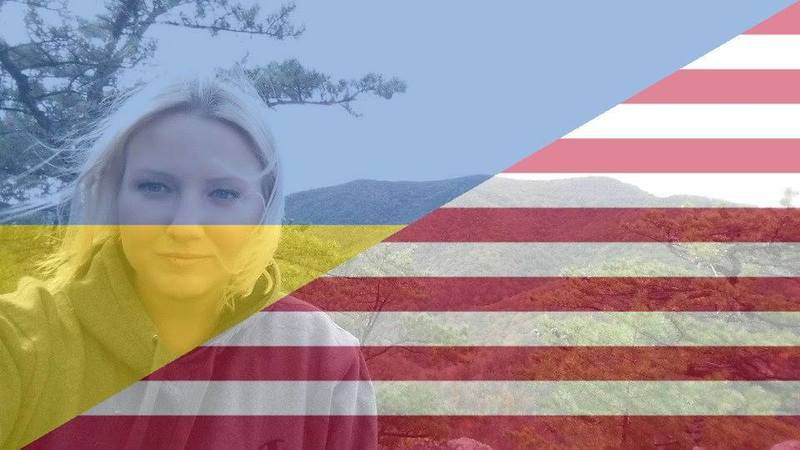 Tell a little bit about yourself and how did you come up with the idea of this walk.

I guess you can say, that I was going through some personal pain/confusion that made me think of that question that everybody probably asks themselves at some point: what am I doing here? What is my purpose? How can I live my life more presently/fully?
I knew that the answer would be found in walking, because walking has always been healing and transformative for me. I had walked the Camino de Santiago (old pilgrimage walk across northern Spain - 500 miles/800 km) 11 years ago, and it was the best experience of my life and it really shaped me as a person. So as I was in my "low", I knew I needed to find that "place" again, and I knew i needed to become more self aware, make changes, and grow. But Ukraine has always been a big part of my identity and especially when the war with Russia began -- I became very involved in voolunteering efforts and I didn't want to lose that focus/abandon her just because I needed to work on myself. I thought about walking The Camino again, but it seemed too short and too quiet/"inward" of a journey to bring Ukraine into. It just didn't feel right to me when i began looking into the idea. So I started to think of: how can I walk and improve myself -- physically, mentally, spiritually -- while also not forgetting Ukraine, and actually benefiting her, too? I remember a "light bulb moment" -- when I thought -- America!! I immediately googled the idea and saw that it had been done before, and that indeed, most people who make this journey do so to bring awareness to a cause.
The moment I thought of this idea -- I felt at peace. When I researched it and started plotting the journey - I felt happy, and excited,  and knew this was the right thing to do.

What is your relation to Ukraine?
I'm Ukrainian-American. Born in USA, "first generation." Like many Ukrainian-American families of that wave, we kept many traditions alive growing up. As a teenager and going forward, I actively participated and involved myself with many Ukrainian events/people- zabavy, Soyuzivka, film screenings, museum exhibitions, etc...
I had also visited Ukraine when  I was 15 - I taught English to orphans/half orphans of a wide age range (12 to 22 years old). It was an amazing experience and I fell in love with Ukraine and its people at that time. Later, during a summer when I was in college, I studied abroad in Lviv at Ukrainian Catholic University.

Tell us more about you recent visit to Ukraine?

I lived there for 6-7 months last year and in the year prior to that I spent about 3-4 months between Kyiv and Lviv. I observed the Presidential elections in 2014 and the parliamentary elections later that year. This was the first time I had returned to Ukraine in 11 years (since my studies in Lviv) and it was amazing to see how much had changed!

When exactly did you start? How long the preparation for this walk took?

I started on November 21, 2015, which coincidentally is the Day of Freedom and Dignity in Ukraine (a friend pointed this out to me :)). I originally wanted to start the journey full-time on January 1 (symbolic reasons :)) but my family convinced me this was a bad idea because of the winter weather. So, to get in some distance and also to do a little training, I would walk on weekends when I was free -- I would drive to each location where I left off; then walk 5-10 miles, and come back home. I also was considering bringing my dog with me, but I quickly learned he was not cut out for this journey :) (much to his dismay!)

Do you have support of your family, friends?

Yes, everybody has been incredibly supportive. My family is understandably concerned about my safety and the risks, but they support what I am doing and know it is what I want to be doing.

I only told a few people about my idea initially because I wanted to make sure that I could do it. Once I was on the road full-time for 2 weeks and saw that things were going smoothly, I "went public" and posted the page to my facebook wall. The outpouring of support was beyond my expectations... I was,and am, so grateful to everybody who is so positively standing behind me and cheering me on. It is so inspiring and motivating to me. I had thought, that people might think I had lost my mind :). But I was very determined, anyway, to pursue this idea. And it hadn't even occurred to me that Ukrainian media would pick up on it (now, I see this was naive) -- I thought, a few hundred friends would follow and perhaps a some people I met along the way, out of curiosity :)

How much weigh do you carry? What is your strategy in regard to supplies - food, water etc?

I have never actually weighed my backpack but I estimate it is about 25 lbs (11-12kg).  The areas I am walking through are well-traveled so there has been at least a gas station at some point along the way. I always preview my route on google maps/google earth to know what's ahead, so if I am staying somewhere where there are no supplies around, I pick something up prior to arriving to my destination.

Do you rely on donation or you personally covering the costs?

I'm personally covering the costs. I am working full-time at the same time that I am walking. My job has remote work flexibility and therefore I work in the overnight hours, and walk about 4-5 hours during the daytime. I say on my website that I'm working full-time; walking part-time :). When this idea came to me, I recognized that I had a really unique opportunity to put it into action.

I don't accept donations for my personal expenses and it is not intended to be a "fundraising" walk, but along the way, I would be thrilled to raise money for three organizations I work with closely and support: Волонтерська Сотня Україна - Світ (in Kyiv); Ukrainian Freedom Fund (UFF); and Ukraine Rising (UR). I  added a link to my website, where people can send me a donation for those organizations and I will send them a postcard from along the way. For those who want tax receipts, their money would be directed towards UFF and UR because they are US tax-exempt orgs; but I hope ultimately any money raised would be divided pretty equally across all three.

How do choose the city to visit, people to talk to. I mean what is your strategy overall?

I chose my path based on the amount of lodging along the way :) I have to reach a motel/inn every night because I have to get some rest before waking up around midnight to work. I need wifi connection as well. So the path I have mapped provides these amenities within walking distance along most of the way.

My route changes often though and now that I am on the road, I plan only a few days in advance. Weather and how I feel impact where/how far I go that day. There is no rush for me to finish and I take each day as it comes and don't get too caught up in being strict and sticking to an exact schedule -- just letting go and seeing how things happen :)

I don't really choose the people to talk to, but they often start conversation with me - asking me where I am going, what I am doing. And now that I have walked some distance, I expect the local media of the towns I walk through will be interested in covering me. This is the best exposure, because then people who drive by me or see me in town recognize me and approach me and honk their horns/wave to me. And this walk was always intended to be outreach to Americans -- since many are not familiar with the situation in Ukraine.

I'll generally try to avoid it, for safety reasons, and use a taxi if available when there are long distances between towns and I cannot cover the full distance that day to reach my next lodging/destination.

What about safety issue?

Yes, safety is an issue but I am very cautious and try to plan smartly. I carry pepper spray and a taser with me - in case I run into aggressive animals or people. There is risk, in walking alongside the road - that a car might not see me or be under the influence and run into me but I stay as far from the road as I can and I always look at the oncoming traffic. Also, some people might be tempted to approach me/give me problems as a young woman walking alone, but so far I have only run into very kind, generous, warm, wonderful people.

I suppose there is also risk of people not supporting my "message" and trying to cause me problems for this reason, but that is why for security and privacy reasons, I am not disclosing my full name at this time.

How many miles you walking on usually during the day?

Right now I walk an average of 10-12 mi but it will increase soon to 12-15 mi as the distances between towns becomes a little wider. On Saturdays I can walk a longer distance because I have all day to do so. My longest walking day so far has been 18.5 miles (30 km) but there are days which I expect to walk 20-25 miles.

What usually American are telling about Ukraine (if they know about it) or how they react to your stories?

Americans and what they know -- it's been pretty mixed -- some don't know anything; others vaguely remember Maidan in the news; others are very familiar, either because they pay attention to the news/history or they happen to have a Ukrainian friend or coworker. But the reaction -- 100% has been positive so far, of everyone I've encountered. Everybody has agreed that Putin is bad, and they've all been very supportive of what I am doing and say it is a good thing. A lot  of people want to do something, too, to show me that they support me -- often, they buy my lunch or drink or something.

Have you ever met the people who were brainwashed by Russian propaganda?

I haven't met anybody who has been convinced of Russian propaganda. Perhaps when I get to a bigger city - but even then, I doubt I will meet such people, unless they are Russian/Eastern European background.

Why do you think Americans should care about the country that is so far away. 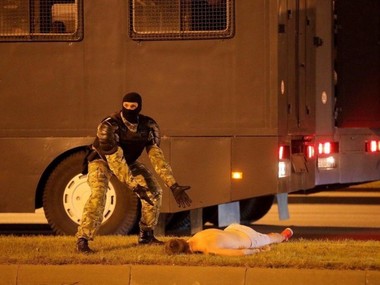 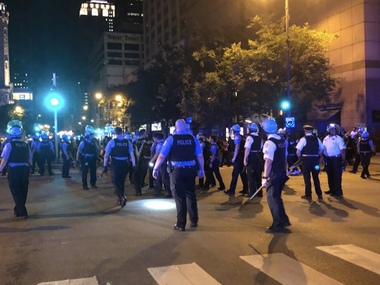 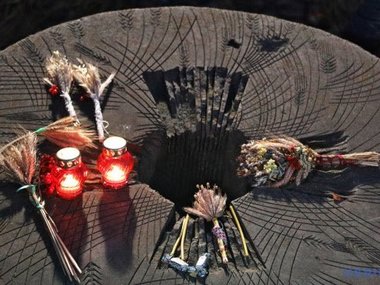