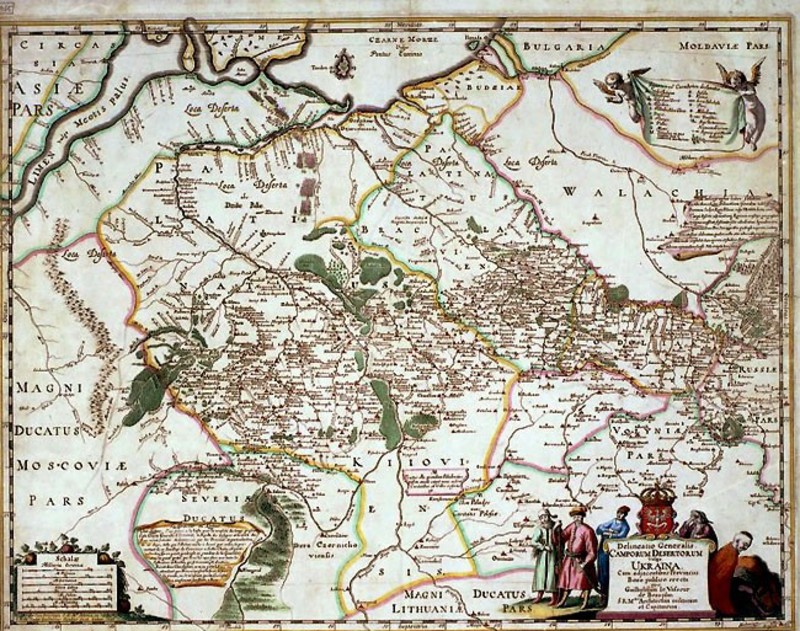 Many people wonder about the meaning of their surname.  The meanings of many English surnames are easy, but what if your ancestors didn't come from the British Isles? Do you have any idea what your surname means in English?

If you are of Ukrainian or Polish ancestry, I may have a few answers for you.  About 20 years I found an article by Greg Gressa about Ukrainian surnames online.  It has disappeared from cyberspace, but I'm glad that I printed it for my father many years ago.  This post is a summary of that article.

Surnames were developed for business purposes and accurate record keeping.  Sales of land and villages were recorded and in order to differentiate the parties, who might have the same first name, a  surname was necessary.  By the 14-15th century, surnames were used by the princes, upper class, nobles and large land owners.  In the cities and towns, surnames became necessary in the 15-16th century.  Most of the people in cities were either tradesmen or merchants, and needed to record their business transactions.

After the partitions of Poland (1772-1795), the peasants needed surnames because they were necessary for taxation purposes and military service. In the Austrian Empire churches were required to keep records of all births, deaths and marriages. In 1632, Orthodox Metropolitan Petro Mohyla ordered priests include a surname in all record of birth, marriage and death.

There are four types of Ukrainian surnames.

I will write about the first two types of surnames, and continue with the others next week.

Surnames based on First Names

This group is large and diverse.  They are formed from the first name of a father, mother, grandfather,  or the founder of a family.  From ten to twenty surnames can be formed from one first name.
The most common Ukrainian first names were: Andrij, Choma, Danylo, Demian, Fedir, Harasym, Havrylo, Hryhir, Illia, Ivan, Jakiv, Josyp, Juriy, Klym, Lavro, Luka, Maria, Marviy, Mykola, Mykhailo, Oleksander, Pavlo, Petro, Prokip, Pylyp, Roman, Sava, Stepan, Tymofiy and Vasyl.

From the first name Ivan, meaning John in English,  130 different surnames can be formed.   The most common variations of Ivan in Ukrainian are Ivas, Jan, Vakhno, and Vanko.  The surnames based on Ivan include: Ivaniv, Ivankiv, Ivasiv, Ivashko, Ivankhiv, Janiv, Jankiv, Vakhniak, Ivaniuk, and Jantsur.

Surnames based on women's names are rare.  Malanchyn is based on the name Malanka, Palahniuk comes from Palahna, Marunchak from Marunia (a form of Maria).

When a woman married, she was known by a form of her husband's first name. If her husband's name was Petro, she was Petrykha, (wife of Petro). From these matronymic forms, surnames ending in "yshyn" were created. Petryshyn came from Petrykha, 'Romanyshyn from Romanykha and Ivanyshyn from Ivanykha.  All Ukrainian surnames ending with the suffix "yshyn can be traced to matronymic  forms.

Surnames based on Residence or Origin

Surnames which show the actual place an ancestor came from: These names are based on a a town, village, city or region that the ancestor was from.
Ternopilskyj, from the city of Ternopil'
Volyniak, from the region of Volyn.
Ostrivnyj, lived on an island.
Novokhatskyj, lived in a new house.

Names that begin with the prefix "za" mean beyond or past.
Zaozirnyj, lived past the lake
Zabolotnyj, lived beyond the marsh.

Names that begin with the prefix "pid" mean under, by or beside.
Piddubnyj, lived under an oak tree.
Pidhirnyj, lived beside the hill/

Names based on a specific place a person came from.
Kryzhanovsky, from the Polish village of Kryzhanowice.
Besarab, Basaraba, came from Bessarabia.
Halytsky came from the town of Halych.

Names that show ethnic, national or tribal origins other than Ukrainian.
Nimchuk, from Germany (Nimets means German in Ukrainian)
Shvedyk, from Sweden. (Shved mean Swede in Ukrainian)
Tataryn, means Tartar, the Turkic people of the "Golden Horde."
Venhrynovych, came from Hungary
Moskalyk, came from Russia.
Boyko, Boiko, Boichuk, Bojchuk,  From the Ukrainian work boyko, a Carpatho-Rusyn people from Transcarpathia.    (One of my ancestor's surname was Boyko.)
Voloshyn, from Volokh, an ancient tribe that originally lived in Romania and Moldova.

Tags English surnames
Back Source: blogspot
Follow us on: