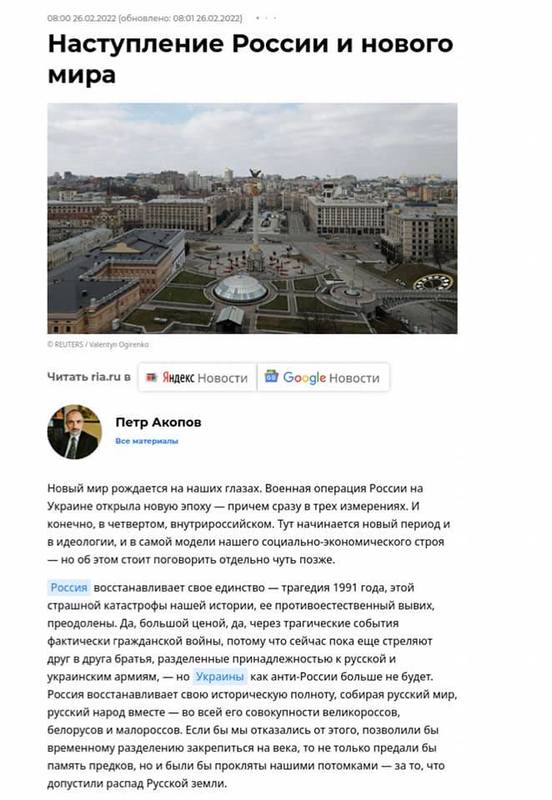 RIA Novosti accidentally published a pre-prepared article about Russia's victory and spoke extensively about what awaits Ukraine now (after the occupation they planned). The news was immediately deleted, but good people managed to copy it. Links to the archive have also been removed, but good people have managed to make screenshots that do not burn.

Read on to realize this. Aloud.

Screenshot of the article see above. Below is the wording of the article they prepared ahead of time because putin thought that occupying #Ukraine will be a walk in the park...

"Russia is restoring its historical fullness, gathering the Russian world, the Russian people together - in its entirety of Great Russians, Belarusians and Little Russians (malorussy - this is how they referred to Ukrainians in times of ussr). If we had abandoned this idea, if we had allowed this temporary division to take hold for centuries, then we would not only betray the memory of our ancestors but would also be cursed by our descendants for allowing the disintegration of the Russian land.

Returning Ukraine, that is, returning it back to Russia, would have been more and more difficult with every decade - the conversion, de-Russification of Russians and inciting Little Russians-Ukrainians against Russians would gain momentum. Now this problem is gone - Ukraine has returned to Russia.

This does not mean that its statehood will be liquidated, but it will be reorganized, re-established and returned to its natural state of part of the Russian world. Within what borders, in what form, will be determined (through the CSTO and the Eurasian Union or the Union State of Russia and Belarus)? This will be decided after the end is put in the history of Ukraine as anti-Russia state. In any case, the period of the split of the Russian people is coming to an end."