In 12th century the land was first mentioned as Ukraine. Russia did not exist 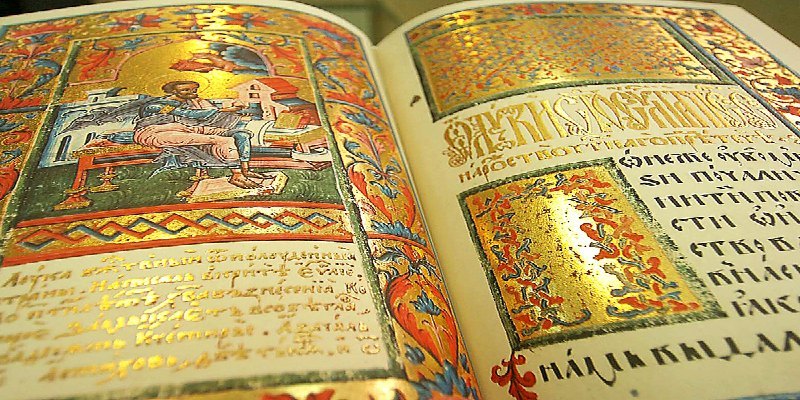 For the first time Ukraine was mentioned in the Hypatian Chronicle. Not Little Rus’ or something else, but Ukraine. Nobody heard about Moscow and Russia at that time.

The Chronicle includes several components: Lavrentian Chronicle, the Tale of Bygone Years, Chernihiv, Kyiv, Galician–Volhynian Chronicles which described the events from 860’s to 1292’s. Sources of the chronicles are diverse: Palatine chroniclers, palatine letters, ambassadors’ reports, military tales, stories of bystanders, the Greek chronicles and so on.
Ukraine is mentioned for the first time in the Tale of Igor’s Campaign against Polovtsy in 1185. 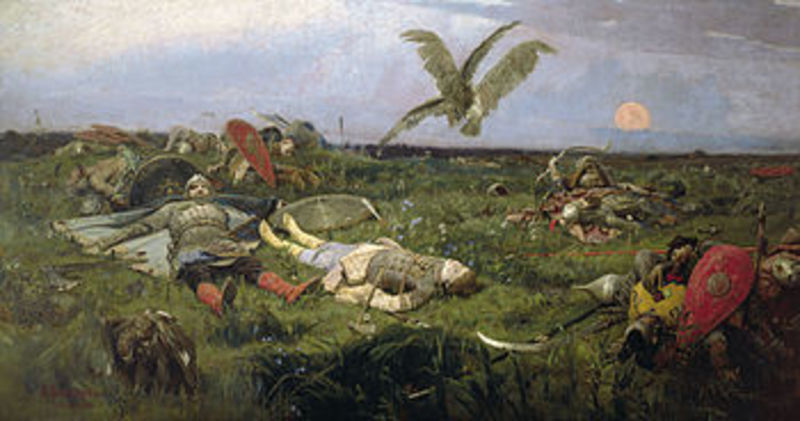 The field of Igor Svyatoslavich’s battle with the Polovtsy, by Viktor Vasnetsov. Credits wikipedia.org

Many sources identify Kyivan Rus with Ukraine. In some versions, such as Ermolaevsky list (1189-1213 years), Ukraine is called Krajina (country), in Kyiv chronicles – Galich Ukraina.
Also, the name ‘Ukraine’ is mentioned in connection with the death of Pereyaslav Knyaz Volodymyr Glebovich, later in the description of events during Galician-Volyn Knyaz Danylo Romanovych regiment. Something like that.

What historical data will help to clarify Ukraine and Russia backgrounds.
Higher education institutions: the Russian Academy of Sciences was founded in 1724, Moscow University in 1755. Ostroh Academy was founded in 1576 in Ukraine, the Kyiv-Mohyla Academy was established in 1615 and Lviv University in 1661.
First printed ABC book in Ukraine was published in 1574 in Lviv, and in the Tsardom of Russia it happened 60 years later in 1634.

Religion: Kyiv Metropolia was founded in the year 988, and Moscow Patriarchate only in 1458. Kyiv Metropolia is 460 years older than Moscow ones.
Capitals: Kyiv is one among the oldest cities in Europe and was founded in 482, while Moscow was founded in 1147 by Yuriy Dolgoruky, the son of Volodymyr Monomakh. So, Kyiv is older than Moscow by 665 years.
The first monarch who was crowned in the Tsardom of Russia was Ivan the Terrible in 1547, and in Ukrainian lands it was the first king of Rus’ Daniel of Galicia in 1253. 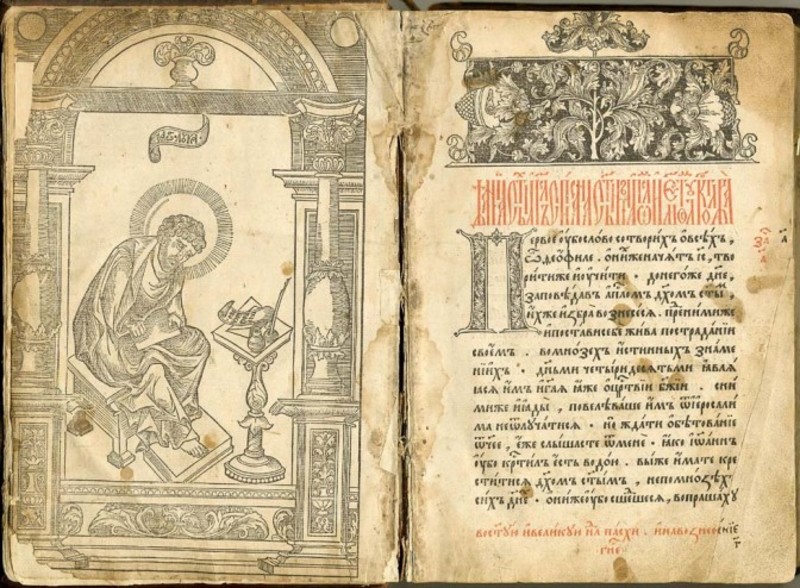 Mongol yoke: Kyiv lost the Mongolian yoke in 1363 after the Battle of Blue Waters; Moscow lost yoke in 1480 after great standoff on the Ugra river, and Muscovy paid tribute to the Crimean khan till 1700, including the first years of Peter the Great reign.
Name: For the first time, the term ‘Ukraine’ was found in the chronicles in the year 1187. Term ‘Russia’ was found only during the reign of Ivan the Terrible 400 years later.
Last, but not the least, famous Ukrainian Pylyp Orlyk is the author of one of the first constitutions in the world. On April 5th, 1710 he was elected as a hetman. On the same day he announced a ‘Pacts and Constitutions of Rights and Freedoms of the Zaporizhian Host’. Worth mention, that the U.S. constitution was adopted in 1787. In France and Poland it was adopted in 1791.

What historical facts you should know on Ukraine and Russia origins
1. A state called Muscovy Peter the Great renamed in Russia in the 18th century, in 1721.
2. The tribe called Mokshas named their river Moskva, and the translation of the title from the Moksha language sounds like ‘dirty water’. In any other languages of the world there is no translation for the word ‘Moscow’. The word ‘Kremlin’ has Tatar roots and stands for fortifications on the hill.
3. In the Middle Ages all European cartographers wrote and marked the frontier of Europe along the borders of Rus (Rus is a territory of present-day Ukraine). Muscovy is Ulus, with its Finnish people, has always been a part of the Horde, and was referred to Asia by Europe.
4. Muscovy (Russia) paid tribute to the Crimean Khan, its sovereign ruler and master, who was the legal successor of the Golden Horde, until 1700. Tsar of Muscovy met Crimean ambassador on Poklonnaya Hill, put him onto the horseback, walked on foot himself leading the horse with the Crimean ambassador to the Kremlin, put him on his throne, and stood up in front of him on his knees.
5. In 1610, in Muscovy Borys Godunov (Murza Gudun) ended the Genghisids dynasty (Genghis Khan’s relative), and Olexiy Koshka from the Finnish family of Kobyliny was enthroned, and the church gave him the surname Romanov, who allegedly came from Rome to rule Muscovy.
6. Catherine the Great, after the occupation of Grand Duchy of Lithuania (territory of Belarus), the last free state of Kyiv Rus’, in 1795, ordered to name Finno-Ugric tribes of Muscovy Great Russians, and Ukrainians (true Rus citizens)– Little Russians.
7. No one has ever seen the original agreement on the reunification between Muscovy and Ukraine, allegedly signed by B. Khmelnitsky and Tzar A. Romanov.
8. For several centuries, archaeologists have been looking for artifacts, confirming the authenticity of the Battle of Kulikovo, but so far without success. But they pitch a yarn about the victory of Dmitry Donskoi over Mamai until now.
9. Pskov, Novgorod, Smolensk regions of Russia are former Slavo-Ruthenian Principalities, and Finno-Ugric Muscovy had nothing to do with this, until Muscovy-Horde occupied them in 1462, in 1478 and in the 1654. And in other areas of Russia (Muscovy) Slavic tribes and peoples have never lived.
10. Golden Horde and her daughter Muscovy are the only countries in the world that enslaved their own people. This explains why rich in natural resources Muscovy falls behind the European countries with lack in natural resources. After all, the effectiveness of the free people is much higher than the slaves. 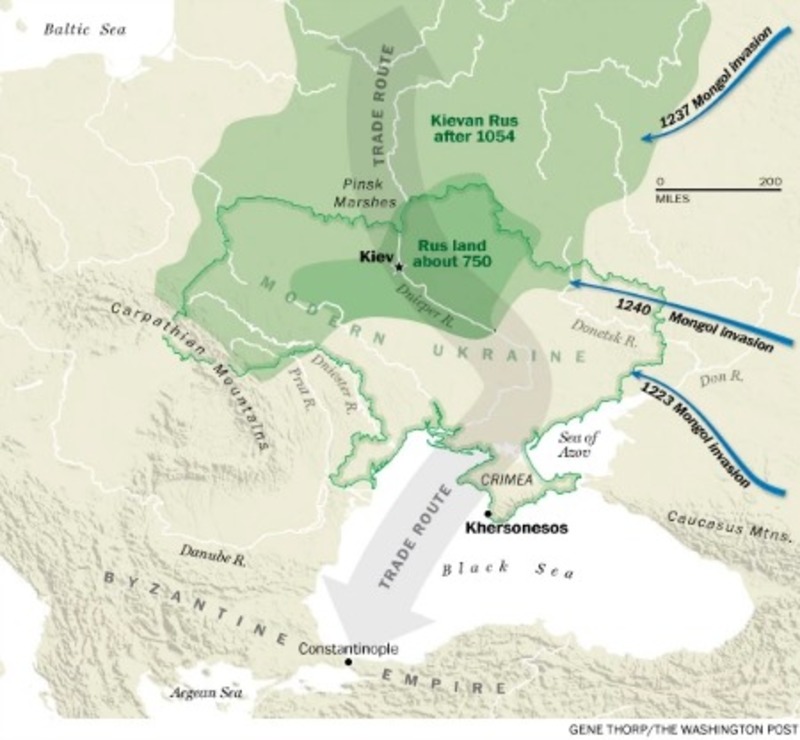 The myths of the Russian national consciousness suffered a new blow! First, the study of the gene pool of the Russian people, conducted by Russian scientists in 2000-2006 showed that genetically Russian are not Slavs, but true-born Finns, that have no difference from Mordovians.
According to the information from the Moscow-based Center of Lev Gumilyov, Russian scientists for the first time in history conducted Russian gene pool research and were shocked by the results! These studies also fully confirmed that the Russians are not Slavs, but only Russian-speaking Finns. Results of the mitochondrial DNA analysis showed that another Russian nearest relatives, except the Finns from Finland are Tatars: Russians are on the same genetic distance of 30 conventional units from the Tartars, which separate them from the Finns! Russian scientists ended the issue concerning myth of the ‘Slavic roots of Russians’: there is nothing from Slavs in Russians! There is only Slavic Russian language, but it has 60-70% of non-Slavic language, so Russian people are not able to understand the language of the Slavs, although the true Slav understands any language because of the similarity of Slavic languages (except Russian). There are Russians in Russia, but not Rus. There always was and will be only Kievan Rus !