These are some of Ukraine's first women police officers. Thanks, in part, to the California Highway Patrol 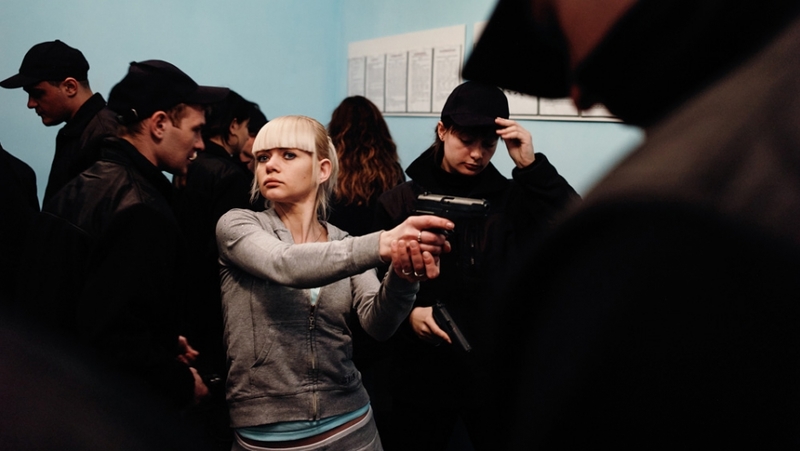 Photographer Misha Friedman spent several months in Kiev documenting female Ukrainian police recruits as members of the California Highway Patrol helped train them for service. We talked with Misha about his images and how this seemingly odd relationship between a group of US highway patrol officers and Ukrainian officers-in-training came to be. Anne Bailey: How did you first get interested in this story about police reform in Ukraine? And where specifically were you in Ukraine?​

Misha Friedman: The story was shot exclusively in Kiev. In December, President Poroshenko appointed a new deputy interior minister, Eka Zguladze, a native of Georgia. She successfully reformed the police there and was tasked to do the same in Ukraine. I lived in Georgia when that reform was taking place and I knew that this was going to be critical for Ukraine. AB: Why do police forces in Ukraine need to be “reformed” in the first place? What’s going on?

MF: Widespread corruption and mistrust of the government was one of the main reason why people took to the streets the previous winter and overthrew the previous president. Old Soviet militia represented the old that needed to change. Anna Lerygina tries out her new uniform the day before graduating from Kiev Police Academy.

AB: The California Highway Patrol helped train these recruits in Ukraine. What’s the connection there?

MF: The California Highway Patrol were the first to respond to an invitation to train new cadets. Since then, other police forces from other cities became involved as well. AB: Many of the Ukrainian recruits in your photos are women. How common is it in Ukraine for women to serve as police officers?

MF: It was very uncommon for women to work in the old police. Their roles were limited to back office operations and dealing with minors and family affairs. Out of 1,900 cadets in Kiev, over 500 were women, and very few dropped out of the training. I knew this was going to have a huge effect, and I chose to focus on them. Maria Ivanova is one of 500 women who make up the first Kiev police force in Ukrainian history to allow women.

AB: In Ukranian society as a whole, how are women treated? In the police training specifically, how were the female recruits treated compared to their male counterparts?

MF: Ukrainian society is very chauvinistic and patriarchal. However, all recruits were treated equally. Now that they have graduated and have been ranked, many women outrank their partners because they have better previous education and more commitment. Lyudmila Ulianchenko, 22, at home after her first shift.

AB: Laura Clare was one of the female California Highway Patrol officers who assisted with the training. What was her experience training the women recruits in Ukraine?

MF: Laura Clare mainly focused on training Ukrainians who went on to become instructors at the police academy. I watched her work a lot with two women. One was a Ukrainian international peacekeeper working for the UN, while the other was a detective from Uzhgorod. MF: In a country as corrupt as Ukraine, it was really great to see so many young people determined to do something about it and actually doing it. I would love to continue working on this story as the reform is now spreading to the rest of the country. I want to look into the effect of having women police officers in the field and how it's affecting the types of crime that is reported and the overall relationship between citizens and government. Misha Friedman is a documentary photographer with a background in humanitarian work. His recent long-term projects deal with corruption and patriotism in Russia and the tuberculosis epidemic in the former Soviet Union.

Reporting for this story was partially funded by the Pulitzer Center on Crisis Reporting.