New York, NY (UCCA) - In his joint press conference with Vladimir Putin in Helsinki, Finland, President Trump stunned the world when he failed to publicly condemn Russia for attacking the United States’ election process. Asked directly if he held Russia at all accountable or responsible for anything in particular, President Trump not only dismissed the findings of U.S. intelligence agencies regarding Russian meddling in U.S. elections, but demonstrated a shocking ignorance of Russia’s international crimes, failing to condemn the Russian Federation’s continuing war against Ukraine, or reiterate the United States’ support for the territorial integrity and sovereignty of Ukraine, Georgia, and Moldova’s internationally recognized borders. Furthermore, the President did not guarantee that the United States’ sanctions regime against the Russian Federation would be maintained until Russia fully complies with their international obligations regarding Ukraine.

The Ukrainian-American community, as do all Americans, look to our Commander-in-Chief to live up not only to his oath of office in defense of our Republic, but to stand in defense of our ideals of Liberty and Democracy when confronted by a foreign adversary. The Ukrainian Congress Committee of America (UCCA), the largest representation of Americans of Ukrainian descent, has spoken out for over 75 years in support of United States authorities executing their duties for the common good of our country. President Trump’s failure in Helsinki to publicly rebut the excuses of Russia’s military intelligence units were a disservice to the legitimate work of United States law enforcement and intelligence officials who serve our country proudly. We further voice our support for the law enforcement officials in the United Kingdom and The Netherlands, who have exposed Russia’s crimes against their citizens with the use of the Novichok nerve agent in the U.K. and the downing of the commercial airliner MH17 over Ukraine, murdering 298 innocent men, women and children. We echo the words we sent to the President before his departure to Europe: Vladimir Putin is not an ally of the United States.

Since Russia’s invasion of Ukraine began in 2014, over 10,000 people have been killed and over 2 million civilians have been displaced - the largest wartime displacement in Europe since WWII. Since 2014, the United States government has spoken with one voice in support of  Ukraine’s sovereignty, independence, and the inviolability of its borders, when it declared as official state policy that the United States will “assist the government of Ukraine in restoring its sovereignty and territorial integrity in order to deter the government of the Russian Federation from further destabilizing and invading Ukraine and other independent countries.”

Today, instead of confronting Vladimir Putin, President Trump failed to publicly affirm the United States’ declared support of Ukraine. UCCA maintains that the national security interests of the United States include the fulfillment of our country’s public and binding security guarantees to Ukraine, and calls on supporters of Liberty and Democracy to condemn the President’s failure to confront Vladimir Putin in Helsinki. Only by standing united with our security alliance partners will we prevail over an enemy that remains the greatest existential threat not only to the United States and Ukraine, but to the entire post-World War II global security structure. 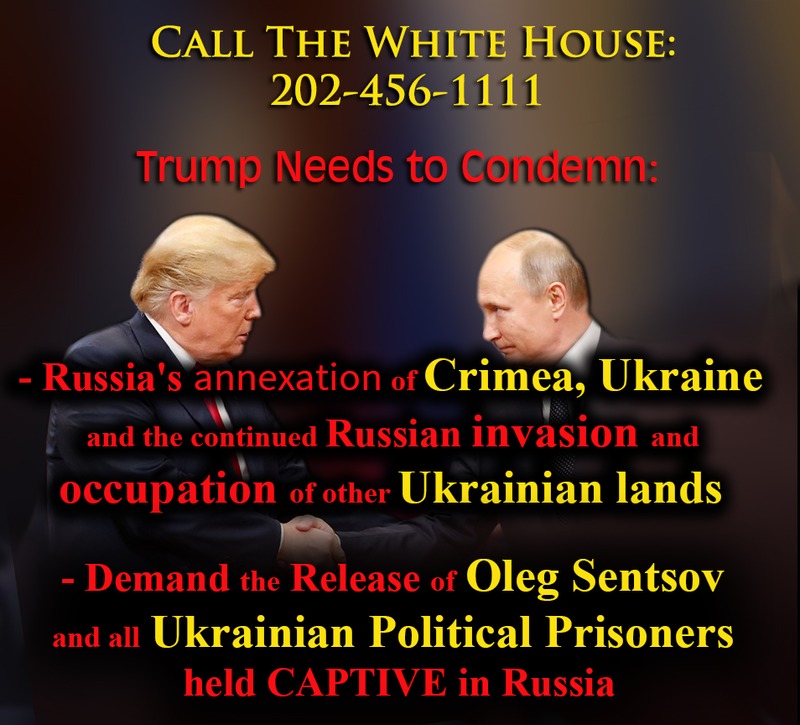