Ukrainians in the United States have reached 1 million - Ukrweekly

Ukrainians are defined here as persons who reported “Ukrainian” as their only (59 percent), first (21 percent) or second (29 percent) ancestry, reports  Ukrweekly. The most recent immigrants from Ukraine, or Fourth Wave immigrants, are defined as persons born in Ukraine, of self-declared Ukrainian ancestry and who migrated to the U.S. after 1987. 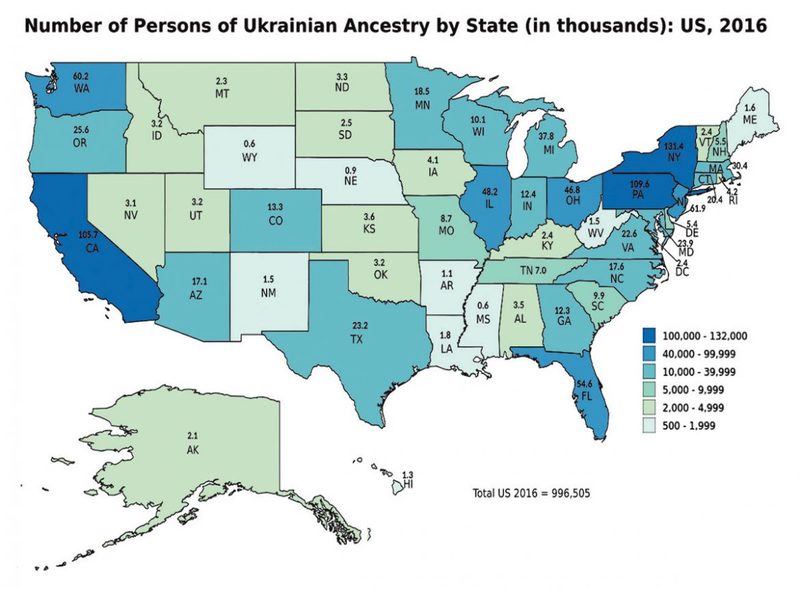 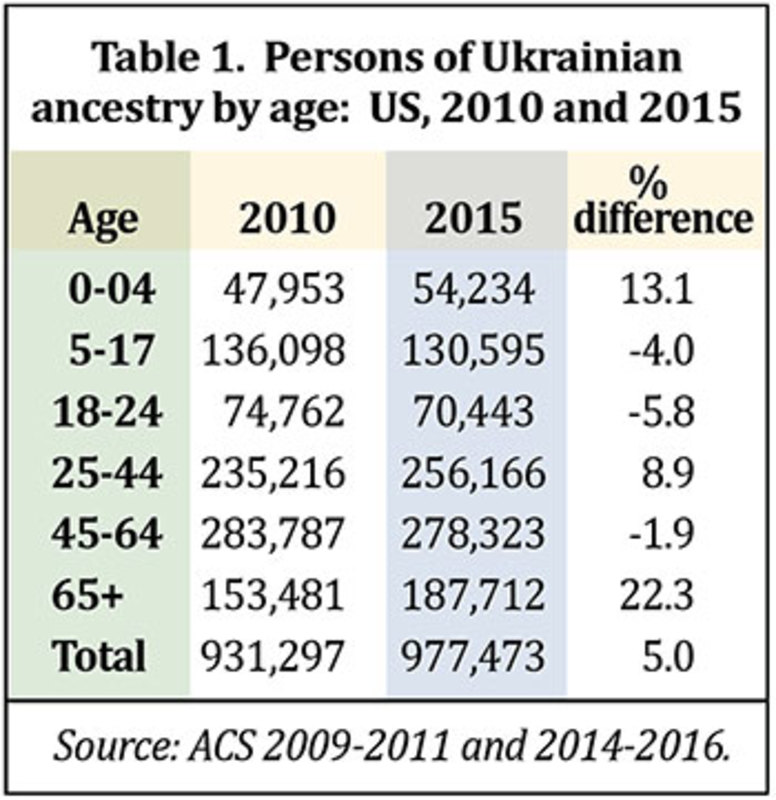 The map shows that Ukrainians in the U.S. are still mainly concentrated on the east and west coasts and in states surrounding the Great Lakes in 2016. With the exception of Arizona, Colorado and Texas, very few Ukrainians live in the middle of the country. Three states – New York, Pennsylvania and California – have more than 100,000 Ukrainians. There is also a concentration of Ukrainians in six eastern north-central states – Illinois, Ohio, Michigan, Minnesota, Indiana and Wisconsin – ranging between 10,100 in Wisconsin and 48,200 in Illinois. Two western states – Washington and Oregon – and three southern midwestern states – Texas, Arizona and Colorado – also have large numbers of Ukrainians, with the largest number, 60,200, in Washington. States with the least number of Ukrainians, under 1,000, are Nebraska, Wyoming and Mississippi. 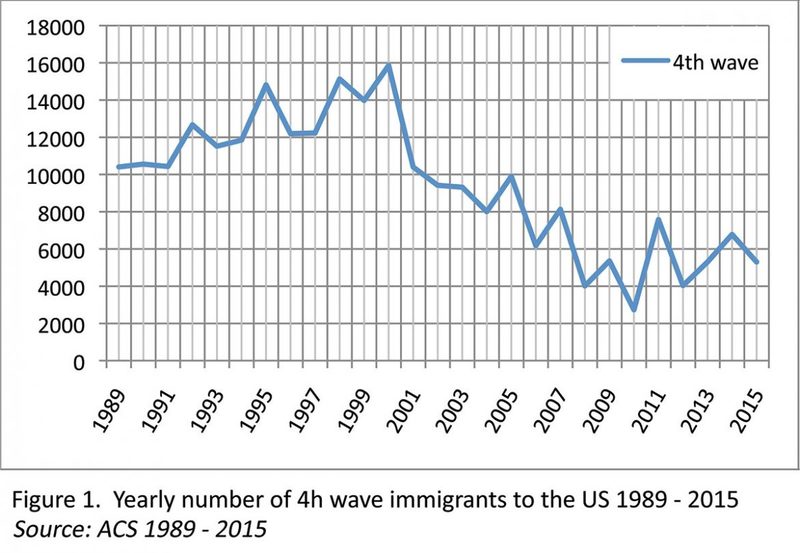 In the last five years, the number of Ukrainians in the U.S. increased from 931,300 in 2010 to 977,400 in 2015, i.e., an increase of 46,100 or 5 percent. Of this number, 4,245 are due to natural increase, i. e., births minus deaths, which amounts to an average yearly increase of 849. This very small yearly increase is due to two factors: a) high numbers of deaths, as Ukrainian Americans have a high proportion of older persons; b) low fertility, i.e., Ukrainians, just like most Americans have, on the average, few children. The remaining increase of 41,931 is due to immigration from other countries, with 83.5 percent of these immigrants born in Ukraine. The other countries with significant, although much smaller numbers of immigrants, are Canada with 2,767 and all former Soviet Union republics besides Ukraine with 1,209. 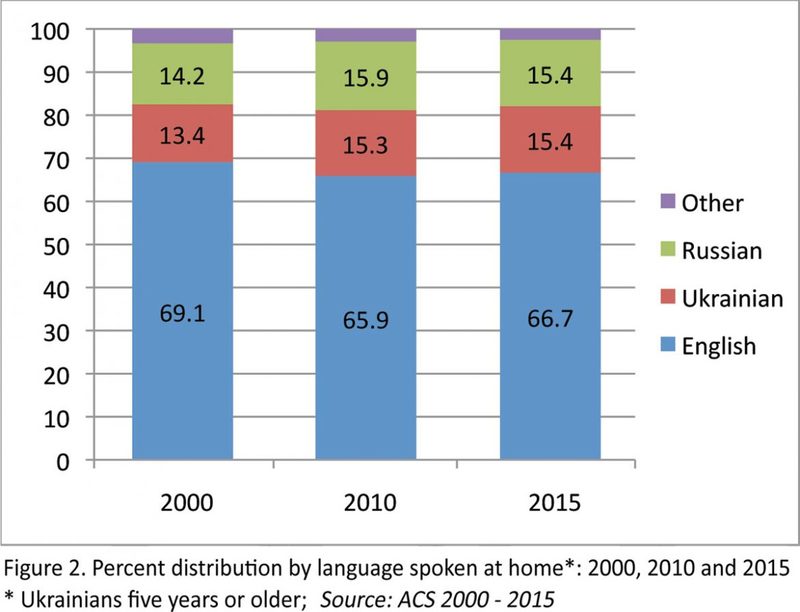 The recent immigration wave from Ukraine reached its peak in 2000, and then started a steady decline (Figure 1). This decline stopped in the last five years and stabilized around 7,000 legal immigrants per year. This reversal of the declining trend came as a surprise, as all the evidence points to a surge in migration from Ukraine to Western Europe, at the expense to some degree of emigration to the U.S. An examination of U.S. immigration statistics shows that this may be an effect of the so-called “chain migration.”

Starting in 2005, the major category of legal immigrants from Ukraine has been “Immediate relatives of U.S. citizens,” i.e., spouses, children and parents. During 2005-2009 these immigrants made up about 30 percent of all immigrants, while during 2010-2015 this percentage increased to 51 percent. After a certain time, legal immigrants are allowed to bring close relatives, but this process takes time. This reversal in the declining trend of immigration from Ukraine is likely due to the cumulative effect of this family reunion phenomenon, but it is temporary. We expect the family reunion effect to run its course in the next few years and a resumption of the declining trend. 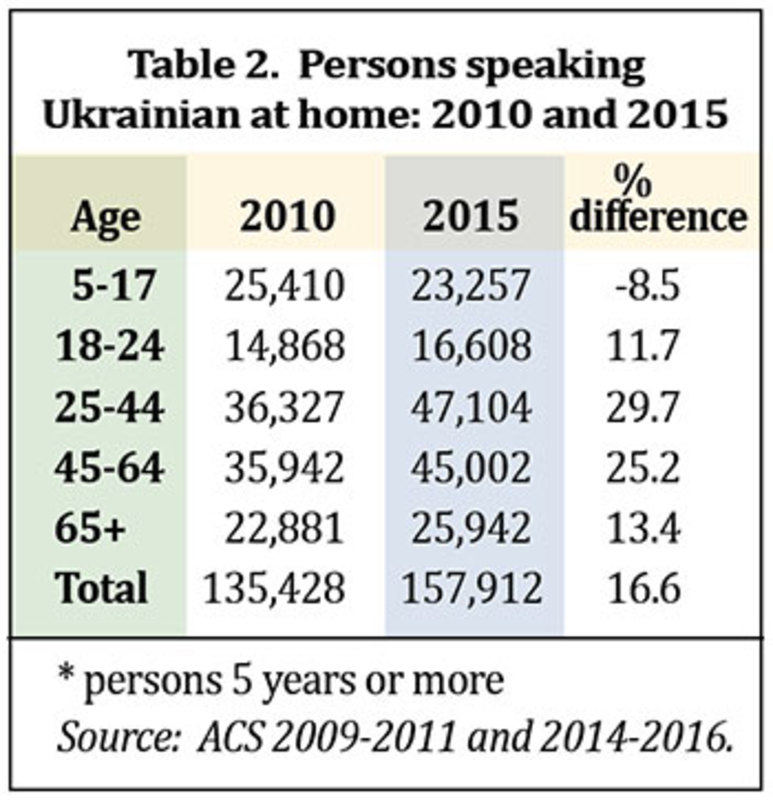 The future of language assimilation among Ukrainian Americans is closely related to language assimilation of Fourth Wave immigrants. Some clues about this are provided by the language composition of age 5-17 Fourth Wave immigrants in 2000, 2010 and 2015. The percentage of English-speakers in this group in the three years is 5 percent, 31 percent and 28 percent. The respective percentages of Ukrainian speakers are 50 percent, 47 percent and 45 percent, and respective percentages of Russian-speakers are 44 percent, 20 percent and 24 percent.

The very low percentage of English speakers in the age 5-17 group in 2000 is probably because many of the early immigrants came on refugee visas and had no family members with years of residence in the country. This lack of security and support was not conducive to a fast integration into American society. This situation also explains the high level of language retention among Ukrainian- and Russian-speaking young immigrants in 2000. By 2010 and 2015 many of the immigrants joined established families, came on more standard visas, profited from the experience of already established friends and neighbors in the U.S., and had better opportunities and motivation for a faster integration, including language assimilation 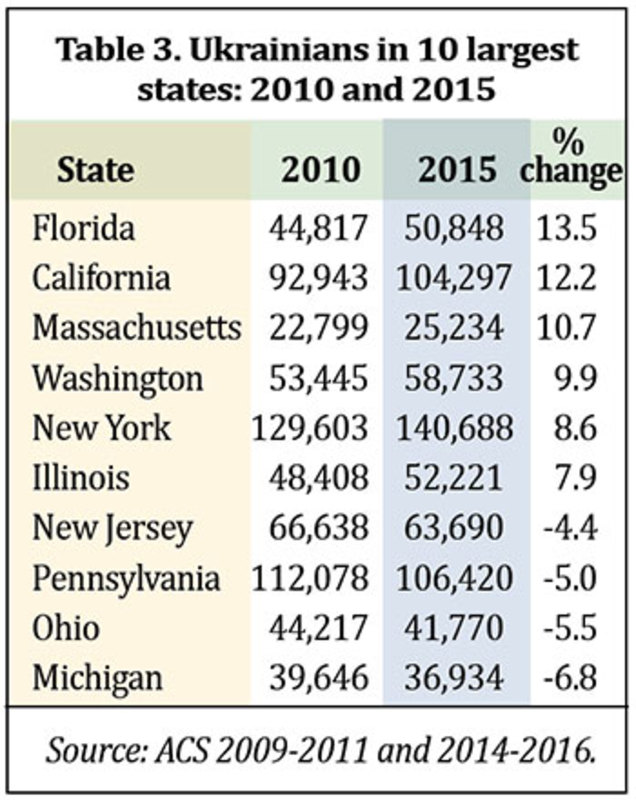 Between 2010 and 2015, 20 of the 50 states and the District of Columbia, experienced losses in the number of Ukrainian Americans, and 31 states experienced gains. Losses were as high as 31, 40 and 43 percent in Utah, Arkansas and Mississippi, respectively, and gains were as high as 84, 73 and 68 percent in New Hampshire, South Dakota and Hawaii, respectively. A common characteristic of all these states with high losses and gains is that they have relatively few Ukrainian Americans. None of the states with large numbers of Ukrainians experienced extreme gains or losses.

Table 3 presents the numbers of Ukrainians in 2010 and 2015, as well as relative differences, for the 10 states with the largest numbers of Ukrainians in 2015. Six of these states experienced gains, and four had losses. Florida had the highest increase with 13.5 percent, followed by California with 12 percent and Massachusetts with 13 percent. Michigan had the highest loss with -7 percent, followed by Ohio with -5.5 percent and Pennsylvania with -5 percent. 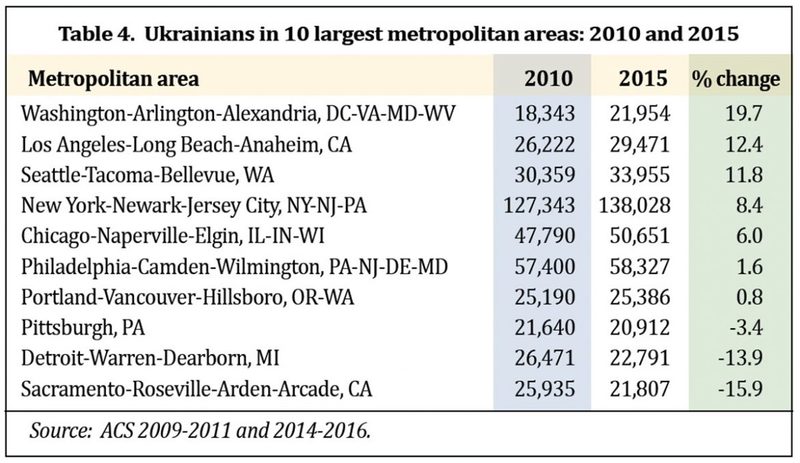 Most metropolitan areas (MAs) with a significant number of Ukrainians in 2015 experienced increases in their numbers in the last five years. Among the 65 MAs in this category, only 23 percent of them experienced losses. Table 4 lists the 10 MAs with the largest number of Ukrainians in 2015. In one of them, Portland Ore., there was little change, and three of them, Pittsburg, Detroit and Sacramento Calif., experienced losses. The Metropolitan Area of Washington, D.C., experienced the largest gain in this group with 20 percent, followed by Los Angeles and Seattle with 12 percent gains each. Other MAs with large numbers of Ukrainians and large increases are: San Diego with 43 percent, Boston with 23 percent and San Francisco with 24 percent. Most of the MAs with losses have relatively small numbers of Ukrainians. Two exceptions are: Detroit with -23 percent and Sacramento with -26 percent.

It looks like the honeymoon of the Fourth Wave is coming to an end. The more than 225,000 legal immigrants from Ukraine have had a huge impact on the Ukrainian diaspora in the U.S. They make up 23 percent of the total group, have reinforced the community with a large number of Ukrainian speakers and talented professionals; many of them have important positions in business, arts, sciences and academia.

More detailed information on this topic can be found at the Shevchenko Scientific Society’s Center for Demographic and Socio-economic Research of Ukrainians in the U.S. web site: http://inform-decisions.com/stat/.