“Heroic Humanism” of the Maidan 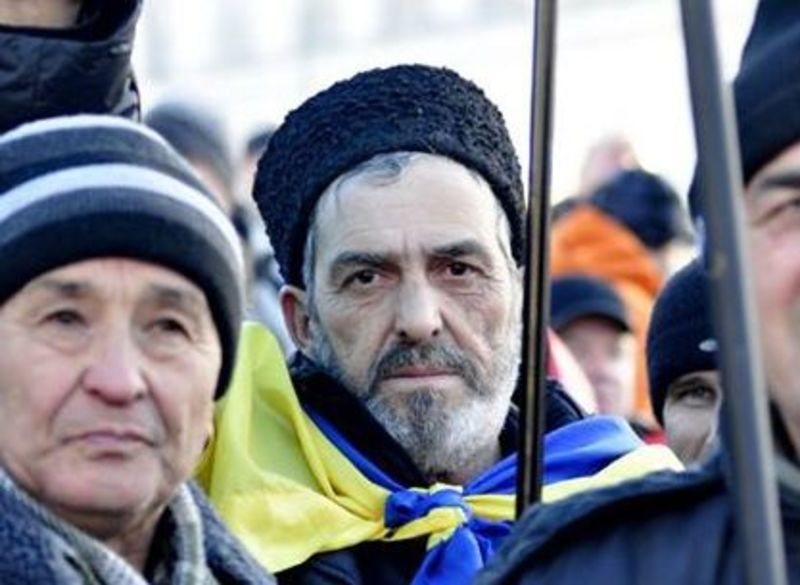 In his Testament, written in 1970 in Rome, Patriarch Josyf Slipyi writes about visions he has in which he describes the Ukrainian Church throughout the continents, recalling them in his farewell “as nourishment for you on your pilgrimage.” He mentions the following, which seems quite appropriate given the events in Ukraine in November, 2013:

“Among those visions that appear before my eyes, I see the capital of Kyiv in my Native Land. As my farewell from this world I offer this quote from the book of Revelation: “I know all about you: how hard you work and how much you put up with. I know you cannot stand wicked men, and how you tested the impostors who called themselves apostles and proved they were liars. I know, too, that you have patience, and have suffered for my name without growing tired. (Revelations 2:2-3)… As for me I am your Son and exclaim in farewell to you: “Shine, O Shine, our Jerusalem, and you will rise again in your former ancient glory!”

Blessed Emilan Kowcz, who died at the Majdanek Nazi death camp, once wrote that there were two types of people whom soldiers wanted to see nearby in situations of impending danger, to calm their nerves and steel their resolve to be where they were: that was the padre and the medic. In Kyiv at the Maidan, the “Maidan of dignity” as it is now known, the image of a priest standing in no-man’s land holding a hand cross or a processional cross, has emerged as an iconic image of the protests. Even newspaper articles with no reference to religion will use such pictures in their stories. An American student in Kyiv at that time wrote on her university website blog about “priests in full vestments walking straight past the protesters who hold Molotov cocktails in their hands to implore the police to bring an end to the violence”.

Invaluable eyewitness accounts such as hers describe the reassuring effect on people by the work of the clergy, and the presence and work of the medical aid volunteers. They have contributed their own startling image of life at the Maidan through their call for medical supplies that includes baby diapers, “because they absorb blood so well.”

Archbishop Emeritus Lubomyr Husar recently described the inhuman treatment of innocent bystanders throughout the street of the Maidan, especially following the January 19, 2014 repression. In his plea for non-violent protest, similarly citing well known examples from history, he stated the following: “It was the government that embarked on an inhuman course of action; it was the government that revealed its true nature, a vindictive face, the face of people for whom nothing is off limits when the goal is to accumulate more or protect what you have.” As an example of how inhuman actions lead to the de-humanization of participants, he further stated a change in perspective about them: “I personally regard such people differently now, that they are beasts, first class criminals.

When I was in Ukraine in 1992, I was given a grammar lesson on the word that should be used to describe the death of a human being that reveals the Ukrainian mentality Cardinal Husar describes. The man who explained it to me had suffered personally under Stalin. I had used the word ‘pomer’ to describe Stalin’s death in 1953, at which point my host stopped me. Given both his record and the man, the correct term, he said, was to say “zdokh” . In other words, there is a distinction made in the Ukrainian language to account for a human death, a very peaceful image, compared with how an animal dies, basically an unemotional interruption of breathing.

The point is that Stalin died like an animal because he had become so dehumanized by his murders and the institutionalization of murder. As a spiritual leader, Archbishop Husar extends a warning, before it is too late, for these individuals of various government authorities not to lose their own humanity. His call for a “categorical path of nonviolence” will appear unattractive when mistaken for “passivity and weakness”, but in reality it means “a very conscientious and methodical struggle.” Human dignity needs to be protected without losing one’s soul in the process.

“The centre of Kyiv is now the centre of the country,” exclaimed a spokesperson for Euromaidan late on Tuesday, February 18, 2014, speaking from occupation lines that had been settled upon between the self-defense cadres and the riot police after nearly 12 hours of violence. “We are now the centre of the free world,” he announced, thankful for the truce in the standoff and the participation of an estimated 20,000 people. They were able to resist the renewed government crackdown in Ukraine, which has given a contemporary Ukrainian meaning to political philosopher Jacques Maritain’s phrase that “power without authority is tyranny.”

Signs that a day like February 18 was approaching might have been predicted by such evidence as a poll from February 3, 2014 that documented a radicalization at the Ukrainian Euromaidan: “KIIS Democratic Initiatives sociological poll shows a trend towards increasing radicalization of attitudes on EuroMaidan,” explained University of Western Ontario professor, Marta Dyczok. Where “previously 20% were prepared to participate in armed activities, a poll released 3 Feb 2014 shows the number has grown to 50%.”

The Kyiv International Institute of Sociology survey found that the number one reason for the ongoing EuroMaidan is “the fierce repression by the government against participants of the protest,” based on an innate understanding that civilized governments do not act in such a manner against one’s own citizens. The participants at Maidan are proving that there is another dimension to human existence: that it is worth going hungry at the physical level in order to effect changes at a spiritual level or even a patriotic level of wanting true democracy for one’s country; that it is worth the exposure to the cold to bring accountability to a government for its unjustifiable violence, and that a democratically elected president cannot, in so blatantly undemocratic fashions, change laws in order to decriminalize obviously criminal behavior by state police forces and state sanctioned criminal gangs..”

These thousands of individuals are examples of what Jacques Maritain means when he writes that “in political society authority comes from below, through the people.” President Yanukovych won his election in 2010 democratically, and that while “authority is the right to direct and command, to be listened to or obeyed by others,” we learn from Maritain that “authority requests power,” through mandates during election campaigns or by bringing issues to parliament. Respect for the dignity of citizens elevates the dignity of the state, while to the contrary, flagrant violations of human rights invalidates the legitimacy of the Yanukovych government.

The idea among participants in the Euromaidan that they represent freedom and democracy for the entire world, or at least for the former Soviet bloc countries, as Viktor Chumak has noted, resonates with Jacques Maritain’s description of fraternity, a common identity that “effectively respects human dignity.” He writes that it “is not to the dynamism or the imperialism of race or class or nation that this humanism asks men to sacrifice themselves,” but rather “it is to a better life for their brothers and to the concrete good of the community of human persons.” His description of a “heroic humanism” could have been written with the Maidan in mind.

The lesson about World War II that came from the Nuremburg Trials into the Holocaust was that it is not a defence to say “I was only following orders.” Bishop Mykhailo Koltun, a spokesman for the Ukrainian Greek Catholic Church and the Bishop-Ordinary for Ukrainian Catholics in the Ukrainian Armed Forces, made the same warning in a statement concerning the possibility of ordering soldiers to mobilize against peaceful citizens. “Blind obedience to orders is not a defence for participation in obviously illegal actions.”

He explained that anyone who takes an oath to serve our country in the armed forces has placed himself at the service of the security and freedom of the nation. When such individuals are faithful to their obligations, they foster the common good and the defence of peace.” Political philosopher Jacques Maritain describes obedience to civil authorities in this manner: “…since authority means right, it has to be obeyed by force of conscience, that is, in the manner in which free men obey, and for the sake of the common good.” This respect for law and order is the beginning of the democratic intuition, “the origin of the democratic sense” in which anarchism and lawlessness submit to “the desire to obey only because it is just.”

It is the proper jurisdiction of the civil authorities to use force to defend innocent people from aggression, from these enemies which do exist. The riot police, for example, have a necessary role against the gangs of thugs that have been outside the scrutiny of the law over the course of the last three months. Imagine the Berkut defending the population of peacefully assembled protestors from the schemes of these vigilantes, disarming them and incarcerating them, bringing them to justice and eliminating their role in Ukrainian society. In such a scenario, the billboards that have been seen in Eastern Ukrainian cities such as Donetsk make sense. The billboards depict a row of riot police in full kit, a second picture of daycare aged children, and accompanied by the phrase, “We Stand with Berkut.” No one would object when the riot police are properly deployed. The problem is that the unjust legal reforms of January 16 sanctioned tactics and targets that could never be justified. The government is to blame for the criminal orders that sent them against the Maidan participants, and the commanders are to blame for forcing Berkut officers to obey immoral orders.

After responding to cries during the shootings that “we need a priest,” and praying for the dead young men gathered in groups of ten and eleven, Fr. Ivan Hall found strength in a quote from one of the early Church Father, Tertullian: “the blood of the martyrs is the seed of the church.” Patriarch Sviatoslav spoke about the transformation of young Ukrainians into adults, mature in their self awareness and sense of responsibility for themselves, for their country, and for their fellow citizens. Antin Mucharskhyi similarly expressed this sentiment to the EuroMaidan participants who heard his concert: these protestors have awakened “to a responsibility for one’s life, for the times in which one lives.”

Jacques Maritain has an emotional description about what it means to be involved in such historic events without losing one’s soul in the process, with the integrity and dignity of free human beings: “what really counts is not victory in the battle, but the way in which the battle is fought and the weapons employed. Weapons of light! Of truth, loyalty, justice, innocence! Let our weapons be unsullied! We shall be beaten – that goes without saying- and historians and politicians are right in warning us of this. But it is impossible to be beaten; when the stake is not biological but spiritual, defeat or victory with unsullied weapons is always a victory.”

Perhaps, then, it is no coincidence that during the all-night vigil on November 21-22 to mark the first anniversary of the Maidan of Human dignity, Patriarch Sviatoslav commented that the day coincides with the Feast of St. Michael, which is known as the Feast of Victory.

Tags victory faith
Back Source: euromaidanpress
Follow us on: